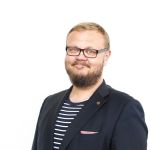 Petri Rajaniemi is founding partner at Future Works, a professional collective of frontline thinkers on the future of work and the ever-changing business landscape. Mr. Rajaniemi started his professional career as Secretary General of the Finnish Student’s Alliance and has since worked as the head of development at Finnish Education Providers and later as the head of development at the Federation of Finnish Enterprises. He has personal background in a research-based biotech startup that was “a complete and utter failure”. Currently, he helps publicly listed and medium-sized companies, as well as public organizations and NGOs, to find a credible future in these turbulent times. When speaking, his aim is to say at least something that no one else says.

Becoming a Speaker is a Process of Unlearning

Once Petri started to take public speaking professionally, he felt that becoming a speaker is not a process of learning but a process of unlearning. The more you let go, the more of you comes visible, the best you are. A lot of people says that “when a child is born, the child is a canvas that life paints the picture on.” Petri has heard and agrees with another version that says “when a child is born, the child is a beautiful painting and life colors it with black paint.” Unlearning is removing the black paint, and as a speaker you must unlearn to remove the black.

“When speaking, my aim is to say at least something that no one else says”

Before becoming a speaker, Petri sat in front of hundreds of seminars. Everybody was saying the same thing, you saw the same type of expert just with a different tie. Petri is not trying to change the way people see the world, but to add something new. When he gives a presentation, he focuses on trying to find something that no-one else has said previously. He is not trying the speak the truth but trying to speak some truths.

This was a dear experience for Petri because it was where it all started. In 2013, he applied for TEDxTurku’s casting and was selected. There is a huge difference between speaking as an organization and speaking as yourself. Petri realized that it was his first ever time speaking as himself, just 3 minutes before the talk started. He felt very nervous, but the talk became a success. The only thing he regrets is that his nervousness didn’t allow him to use humor, as humor is very important for Petri as a way to interact with his audience.

Related: As a Speaker, What Makes You Unique? Find and Share Your Passions

“My practice is practice” Some people thinks that practice is a sign of weakness. Petri practices a lot. He does easily 20 runs for every new talk, in order to “build the routine” for that talk.

Instead of “imagine your audience naked”, do imagine them as human beings: feeding their elderly parents, being frustrated with their relationship, etc. That’s the way to connect and make impact.