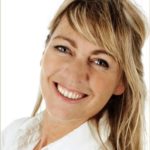 Pacelle van Goethem MSc is a writer and a highly sought-after international speaker and executive coach on the subjects of persuasion, charisma and exerting influence. Her clients include influential companies and people from the highest levels of government and the corporate world. She helps people to use all of their charismatic potential. After her exhaustive research into true persuasion and the best practices of charismatic people, Van Goethem has cracked the magic code and now wishes to share the secrets with everyone whose ideas deserve a platform. She has developed a revolutionary model of the psychology of persuasion and a compelling method that can instantly improve your charisma.

Charisma is the power to persuade others. In order to be persuaded, three things need to happen in the brain:

The trick of persuasion is to find out what the other person thinks is normal, as this varies accross cultures.

It’s a good idea you combine the three styles.

“All my life I wanted to be me, and I’ve never been myself more than in the last six months.” — Karen Budel

“If I had asked people what they wanted, they would have said faster horses.” — Henry Ford

Skin in the Game by Nassim Nicholas Taleb

A GIFT FROM PACELLE: Leave a comment here or on Twitter to participate in a raffle of two copies of the book True Persuasion. Deadline: May 20th. Thank you Pacelle for the gift!