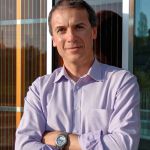 John Zimmer is a speaker and presentation skills trainer based in Geneva. He is a seven-time European champion of public speaking. John is the editor of Manner of Speaking, a popular blog about public speaking followed by readers worldwide. John is also the co-creator of Rhetoric — The Public Speaking Game™, and a TEDxLausanne speaker in 2014.

A speech opener in special

One of John’s clients had to speak in a convention for 20 minutes needed help with her opener. John used his coaching skills to pull a moving story from her. Ultimately the speech opened with the words, “It was raining the day I arrived at the hospital” and she continued the story and kept her audience captivated until the end.

What rhetorical devices are

Rhetorical devices are clever uses of language to make a persuasive argument. As a speaker, the main tool you have is your use of language.

4 Easy Rhetorical Devices for Any Talk

Anaphora is the repetition of a word or a phrase at the beginning of successive sentences. An example from Winston Churchill: “We shall fight in France, we shall fight on the seas and the oceans, …”

Epistrophe  is the repetition of a word or a phrase at the end of successive sentences. From Abraham Lincoln’s Gettysburg Address:  ” … and that government of the people, by the people, for the people”

Anadiplosis is beginning a sentence by repeating the last words of the previous sentence. An example from Star Wars’ Yoda: “Fear is the path to the dark side. Fear leads to anger. Anger leads to hate. Hate leads to suffering.”

Tricolon is a series of three words, sentences or clauses. An example from Julius Caesar: “I came, I saw, I conquered”

It’s a board game that John has co-created with Florian Mueck. The game is in its 2nd edition (2015) and the digital version (app) is in progress. Players practice 1-minute speeches and can use rhetoric techniques, including metaphors.

“All the great speakers were bad speakers at first.” — Ralph Waldo Emerson

Made to Stick: Why Some Ideas Survive and Others Die by Chip Heath and Dan Heath

Losing My Virginity by Richard Branson

Do this exercise 1 minute a day for the next 30 days and it will help you with your stage presence. It helps you to stand in a grounded and anchored manner on the stage. Stand up, let your arms hang on the side, close your eyes. Feel your arms gravity pulling down. Feel the heaviness moving on your legs and then on your feet. When you’re on the stage, feel heavy, rooted.