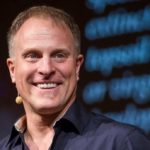 John Bates is in business to bring out what is awesome inside of you so it can live in the world and make a real difference. Executives from organizations like Accenture, Boston Scientific, IBM, Johnson & Johnson, NASA, and more recommend him to their colleagues as the best leadership communication trainer working today. John’s training is based in human evolutionary biology and human neurophysiology so you learn not only what works, but why it works. John has trained hundreds of TED and TEDx speakers all over the world. John also works with C level executives at top companies to make their communications “TED-Worthy.” John is a co-author of “World Class Speaking in Action” an Amazon best seller. He is passionate about people and loves making a difference for those who make a difference.

How John became a speaking coach

“I became a speaking coach because I failed at everything else.” John had been working as a founder or early employee at several Dot-com companies. Even though nay-sayers told him “there are thousands of speaking coaches, don’t be one”, John thought “it’s the thing I’m good at, it’s what I have to offer, and I’m just going to do it.” He became one of the first TED/TEDx speaking coaches when TED became publicly available on Internet and Chris Anderson created TEDx to allow organizing these events across the world.

John’s own mistakes in his first TED talk

John was invited to a TED event for a 4-minute talk. He decided to speak about virtual worlds and virtual goods, as at that time he was working for Entropia Universe. John made two mistakes: (1) he tried to cram everything he could in 4 minutes, and (2) he tried to promote himself.

If the whole world would listen to you for just a few minutes, what is the most important thing (the one idea) that you could tell them? The best TED talks make you feel you’re an insider. Another thing to think about: what is that special thing that you don’t talk to anybody else?

How to get started for your TED/TEDx talk:

An extra piece of advice is: once you have reached your best speech, dig even deeper. Think of: what’s the thing you’re afraid of sharing? That thing will make a big difference on your audience.

One of John’s favorite success stories as a TED coach was with the actor Dolph Lundgren. His talk was “On healing and forgiveness” at TEDxFulbright Santa Monica. His main message was that “If you want to heal the world, you need to heal yourself first.” Dolph was very generous and super coach-able, and he did a phenomenal TEDx talk.

Related: How to Have Confidence Under Pressure

“There will come a time when you believe everything is finished. That will be the beginning.” – Louis L’Amour

Sit down and look for stories that you could tell that can make a difference for other people. Stories with a point. Never tell a story without a point, never make a point without story. Do it in a daily or weekly basis.