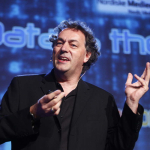 Gerd Leonhard is a Futurist, Keynote Speaker, Author and CEO of The Futures Agency. Listed by Wired Magazine as one of the top 100 most influential people in Europe (2015), Gerd Leonhard’s work focuses on the future of humanity and technology, digital transformation, big data, automation, AI and robotics, media, content, marketing and advertising, telecommunications, culture and tourism, banking and financial services and leadership. His presentations are renowned for a hard-hitting and provocative yet inspiring, humorous and motivating style. Gerd is a much sought-after speaker, having presented at more than 1500 events in 40+ countries since 2005. He resides in Zürich, Switzerland.

How Gerd became a futurist

Gerd started as a musician and producer, and later he got involved in the early digital music business. However, he realized that his calling was helping others to understand the future instead of monetizing and doing startups. His book The Future of Music (2005) became a big success and that skyrocketed his career as a futurist. Today Gerd spends 95% of his time looking at what it might be (in the future) rather than what is. He helps companies and organizations to take strategies to be ready for future scenarios.

Speaking on the future of humans and technology

In November 2014, Gerd spoke at TEDx Brussels, in front of 2000 people. In this talk, titled “Digital ethics and the future of humans in a connected world,” Gerd challenged people to pay attention to the ethical consequences of technology, as today there are some people adoring and being obsessed with technology. Gerd often says that technology is “HellVen” (hell and heaven). During his presentations, Gerd uses many visuals and photos which in many cases are created by his art director. Unlike what many TEDx speakers do, Gerd strives to go deeper than the intellectual or purely entertainment, by giving people a wake up call but also making them feel positive. Gerd has licensed over 20,000 images for his work and he admits that looking for visuals assets and stories is a big part of his job. “Finding one good picture to say something really complex is crucial because that’s how people understand things.”

How technology has changed the way we communicate each other

Communication has become cheap, fast and ubiquitous. Now the problem is that there is too much of it. For some people, offline is becoming a luxury. The real art of communication is communicating with the right people, at the right time, using the right channels, and focusing on what matters.

“Technology is not what we seek but how we seek.” — Martin Heidegger

“It wasn’t raining when Noah built the Ark”

The Future of Business by Rohit Talwar

Spend 5 to 10% of your time looking at the future. Connect with important people and collect information on the topics of your interest. Then you can use Instapaper in order to constantly read offline. Read at least two books a month.